With almost 1,090 hp, the racer is the German marque’s latest effort to further electrify motorsport.

Ladies and gentlemen, start your (electric) engines. Long known for its dominance in racing, Porsche aims to shake up motorsport with the electric Mission R Concept. Breaking cover at Germany’s first-ever IAA Mobility show to take place in Munich (rather than Frankfurt), the Mission R is touted as a possible progression of the iconic 911 GT3 cup car and aims to bring electric racing into the mainstream. “We are now taking the next big step forward in electric mobility,” said Porsche CEO Oliver Blume. “The Mission R embodies everything that makes Porsche strong: performance, design and sustainability.” 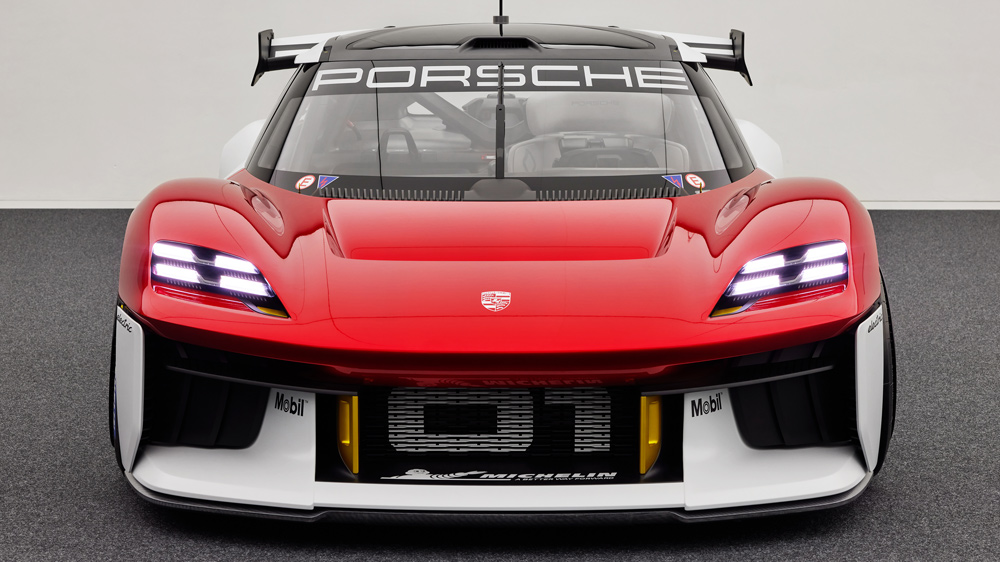 The Mission R benefits from the control of all-wheel drive, with a 480 kW motor in the rear and a 320 kW motor in the front. Combined, the two power plants deliver up to nearly 1,090 hp, more than double the power of the current 510 hp Porsche GT3 cup car based on the current-generation 911. With that massive output, the Mission R is claimed to be capable of dashing silently from zero to 62 mph in 2.5 seconds. 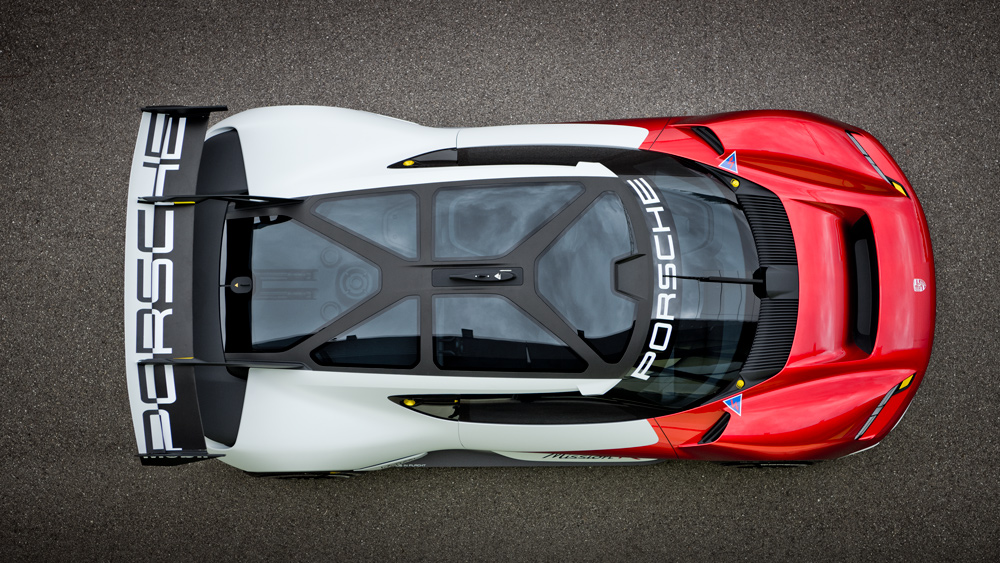 The car can be recharged from 5 percent to 80 percent capacity in 15 minutes.

Horsepower is only one part of the equation, though, and while the car’s weight hasn’t been disclosed, we figure the Mission R’s battery pack is pretty hefty, which is most likely why Porsche says the new electric concept matches the current GT3 cup car’s lap time. A 900-volt charging system can bring the vehicle’s stored energy from 5 percent to 80 percent capacity in 15 minutes, which is spectacular for a road trip, but still painfully long for a pit stop in competition. 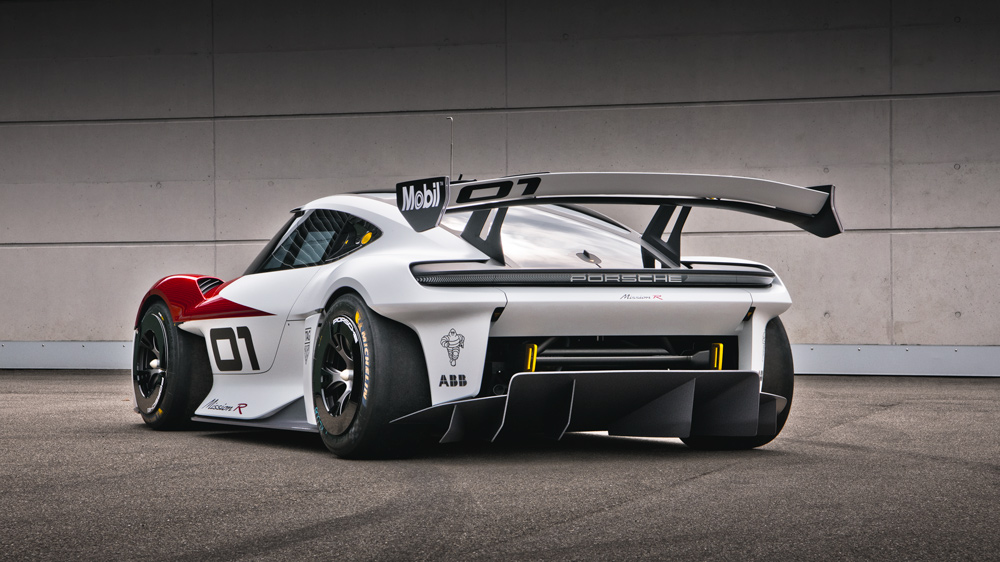 Silent acceleration from zero to 62 mph is touted to take only 2.5 seconds.

Porsche isn’t new to electrification, of course. Ferdinand Porsche debuted the Lohner-Porsche Electromobile at the Exposition Universelle in Paris circa 1900. More recently, his eponymous marque unveiled the plug-in hybrid 918 Spyder supercar in 2014, and the mild-hybrid Le Mans prototype racer that debuted around the same time and competed through four seasons. Porsche also campaigned in the 2019-20 season of Formula E, putting more muscle behind a series that is still dismissed by many fans who think the ability to enjoy a race directly correlates with the decibel level of a gas engine and the volume of exhaust expelled along the way. 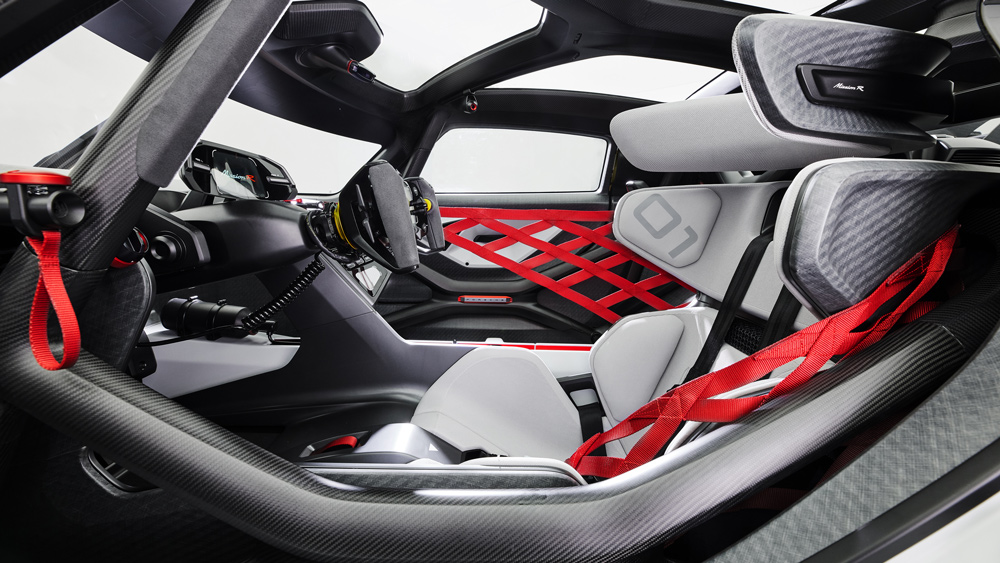 The Mission R’s monocoque doubles as an e-sports simulator.

To emphasize its drive for sustainability, Porsche has made the Mission R concept out of a plastic that’s reinforced by natural fibers from flax plants, which is used on the rear diffuser, front spoiler lip, side skirts, interior door panels and seat. And in a nod to the growing popularity of virtual racing, the Mission R’s monocoque doubles as an e-sports simulator. 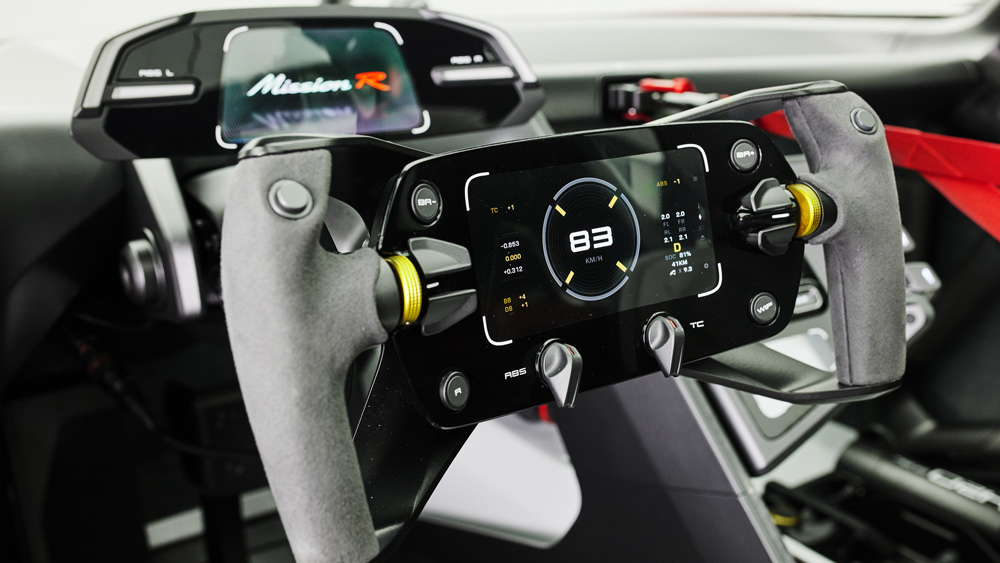 According to Porsche CEO Oliver Blume, “The Mission R embodies everything that makes Porsche strong: performance, design and sustainability.”

While no specific announcements have been made as to whether (or when) the Mission R will become a real race car, it’s no secret that Porsche will continue to push the envelope toward electrification. With the success of the Taycan and rumors that the next Boxster/Cayman will be plug-in only, it’s not hard to imagine that you’ll see—but not hear—some form of the Mission R on a race track near you.