One of 991 examples built, the car offered by ShiftGate Automotive Auction has just 243 miles on it.

Hot on the heels of our recent Car of the Week, a 1968 Porsche 911 R, it seemed appropriate to look at that iconic model’s one and only namesake: the 2016 911 R. Only rarely crossing the auction block, an example is being presented by ShiftGate Automotive Auction, with the upcoming sale beginning September 13. ShiftGate, a newcomer to the online-auction scene, was founded by three business-savvy car enthusiasts and, by the look and content of its website, takes a creative, no-nonsense approach to the online buying and selling of cars. And the 911 R on offer should attract some attention. Finished in white with green factory stripes, it’s a vehicle with only 243 miles on it—about as factory fresh as they come.

Although separated by 48 years, both the 911 R from 1968 and 2016 possess attributes not readily apparent from outward appearance, and both are easily mistaken for more civil 911 contemporaries. Their near-mythic status comes down to rarity, performance and an understated exterior easily overlooked. The original 911 R was never sold to the public, and with only 20 made, is the Porsche equivalent of an albino Komodo Dragon (and only slightly tamer). With the 1968 example presented recently at the RM Sotheby’s Monterey sale fetching $3.36 million, it’s clear that these aren’t daily drivers, either. 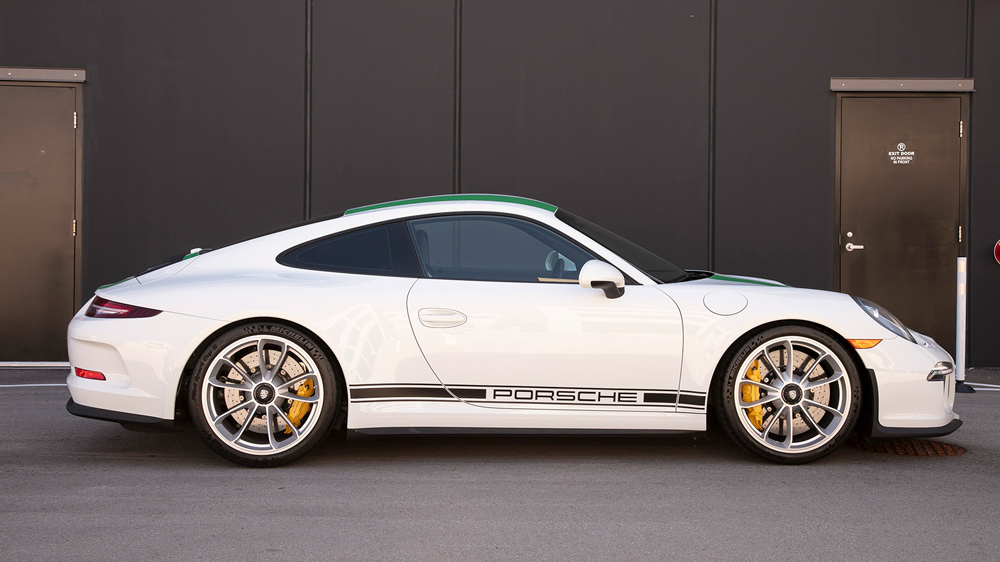 The 2016 Porsche 911 R being offered by ShiftGate Automotive Auction as of September 13.

A daily driver, however, is what Porsche’s 911 has been known to be from the beginning. More contemporary versions, like the well-sorted 991.1 series (2011 through 2016), which led the way for the shorter-lived 991.2 series (2016 through 2019), were so popular that dozens of model variants were offered throughout the years of production.

Yet the 2016 911 R—the swan song of the 991.1 series—was far from an everyman’s 911, simply because there were only 991 manufactured. Offered first to Porsche 918 Spyder owners, allocation evaporated like water in a hot cast-iron skillet, while demand in North America and abroad inflamed the passions and ire of tens of thousands of would-be buyers. The 911 R presents a textbook case study in one particular model’s rise, fall and rise again in value within the collector-car market. Treated more like Fabergé eggs than automobiles, most 911 Rs show few miles and no discernable use. 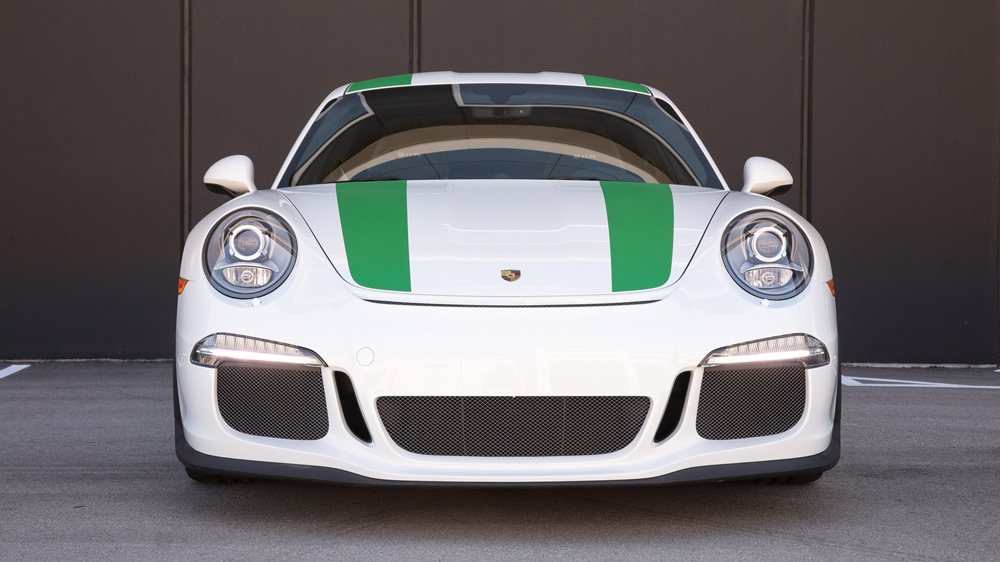 Debuted at the 2016 Geneva Motor Show, the 911 R is essentially a GT3 RS without the wings, scoops and attitude. It also came exclusively with a six-speed manual gearbox, a near-extinct transmission seen in modern cars. That stick shift was an undeniably alluring feature. Unlike bread-and-butter 911s and even the GT3, the 911 R has a magnesium roof and carbon-fiber hood, engine lid and front fenders, plus an optional single-mass flywheel weighing nearly half of the 30-pound, dual-mass unit in an effort to further pare weight to roughly 3,000 pounds.

The engine is the GT3 RS’s 4.0-liter flat-six, naturally aspirated and good for 500 hp and 338 ft lbs of torque. And its 8,500 rpm redline makes the best Porsche sounds imaginable. While Paint to Sample (PTS) cars came off the line, the vast majority were painted white—like their spiritual forebear—and could be ordered with graphics packages, typically red or green. 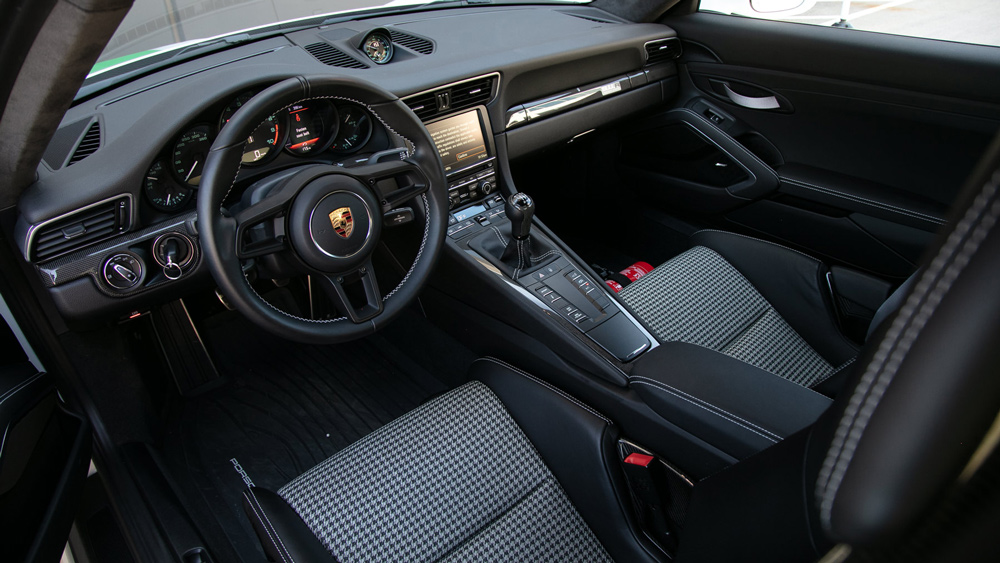 The model variant came exclusively with a six-speed manual gearbox.

With an original starting price of $185,950, the 2016 911 R could have sold by the thousands. But such limited production numbers made it the “flavor-of-the-month,” resulting in wild speculation, with some sellers asking $500,000 or more on the secondary market. Everyone—except the flippers—became incensed. 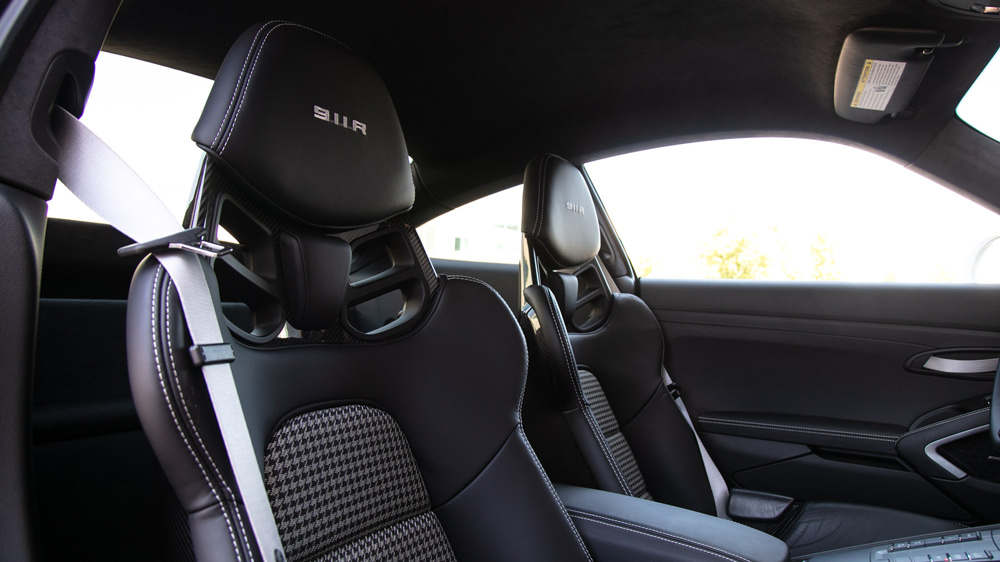 Porsche stewed in its juices and then responded with the 911 GT3 Touring Package for the 2017 model year. A manual-only model, it eschewed the magnesium roof and carbon-fiber panels of the 911 R, but added rear-wheel steering and updates accompanying the 991.2-generation cars. At a base MSRP of $143,600, it was less expensive too, trading exclusivity for (theoretically) unlimited production, while simultaneously tamping down 911 R values a bit. 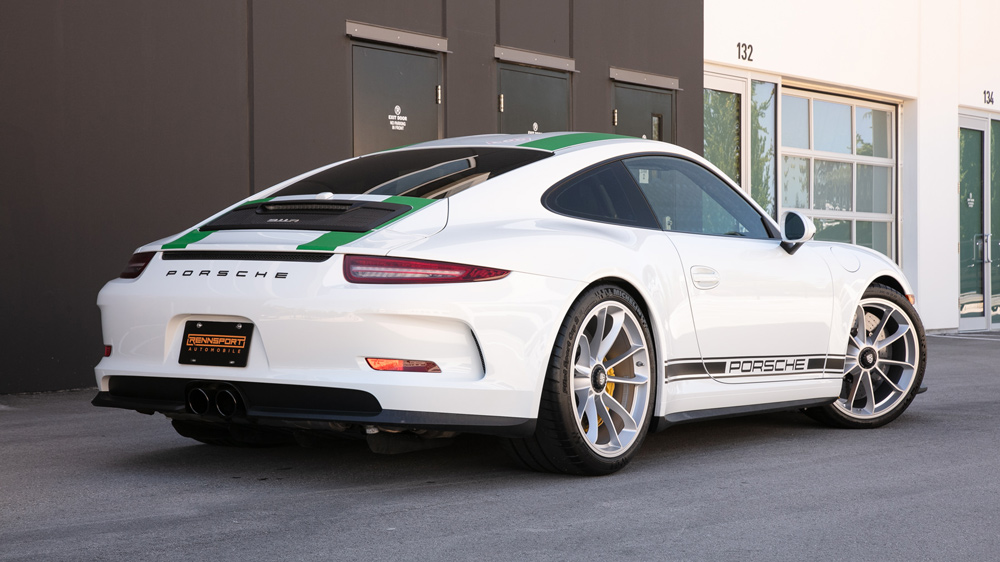 An homage to Porsche’s 1968 911 R, green stripes extend from the carbon-fiber hood and over the magnesium roof.

That was then. In the 911 world, rarity is an attribute that can add considerable value, and with only 991 examples, the 2016 911 R has seen prices once again climbing, with the model poised to be a desirable collectible long into the future.