The hypercar has a dangerously charismatic split personality worth every one of its seven figures.

With twice the power of a Formula 1 car, the ability to hit 60 mph in under two seconds and a $2.4 million sticker price, the new Rimac Nevera should intimidate even an experienced hypercar owner. Yet the automaker’s 33-year-old founder, Mate Rimac, intended his masterpiece to be a highly usable, no-fuss grand tourer. So which is it—Hyde or Jekyll? The answer from behind the wheel, amazingly, is both.

The Nevera is currently the world’s fastest-accelerating production car, but even such prodigious brute force is the result of sophisticated engineering. Rimac’s expertise in high-performance electric drivetrains is such that Porsche made a sizable investment in the company back in 2018. In July, Porsche’s parent company, the Volkswagen Group, gave the Croatian upstart controlling interest in storied French marque Bugatti, helping ensure that the carmaker famous for 1,000-plus hp W-16 engines has a future in the electric era. The new brand is called Bugatti-Rimac. 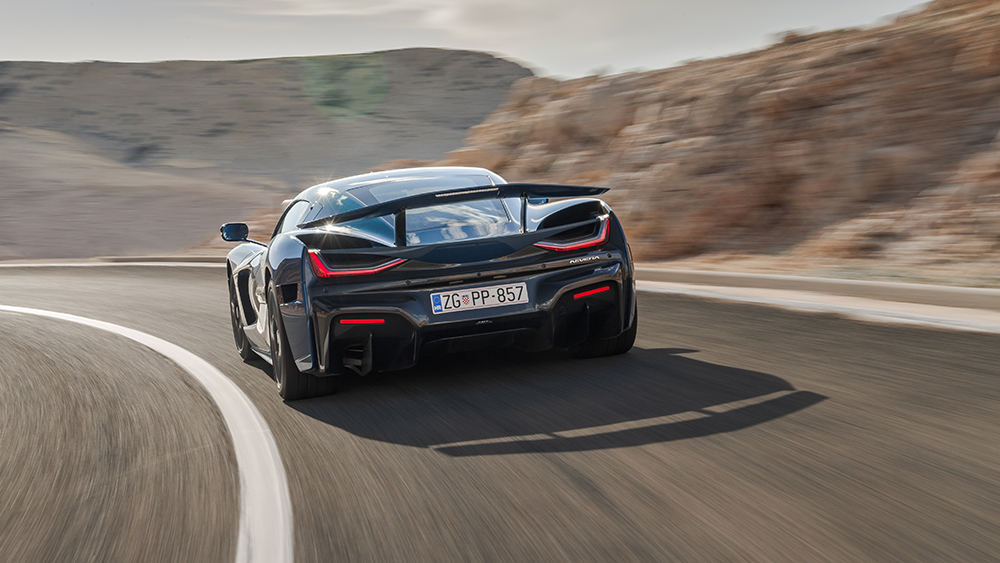 The rear view of the Rimac Nevera.

The Nevera’s dihedral doors provide plenty of curbside theater, but in a nice touch they also take much of the roof with them, making ingress and egress more graceful. The carbon-fiber monocoque chassis—the largest and stiffest ever used in a car—was designed to be narrow at the sills for the same reason.

Similarly, the interior aesthetic is more elegant than extreme, with silken leather, naked carbon fiber and sizable nuggets of aluminum that are CNC-milled in-house. Two huge screens provide a torrent of data on how both the Nevera and its driver are performing.

To cruise around town, use the rotary controller to select “D”—the most relaxed of the seven modes in terms of throttle response, suspension and steering—and the vehicle slips into traffic and glides over even poor surfaces with no more fuss than an Audi R8. Up the pace, though, and it’s impressive how effectively the vehicle’s tech compensates for the mass of its 120 kwh battery, the biggest currently fitted to a production car; the Nevera weighs in like an S-Class but handles as nimbly as a 911. With a motor on each wheel and a combined 1,914 hp, the car features power that can be shuffled to whichever corner needs it, pulling the inside wheel tight to the apex if you want to be neat or blasting it out of the rear tires in a colossal smoky drift if you don’t. 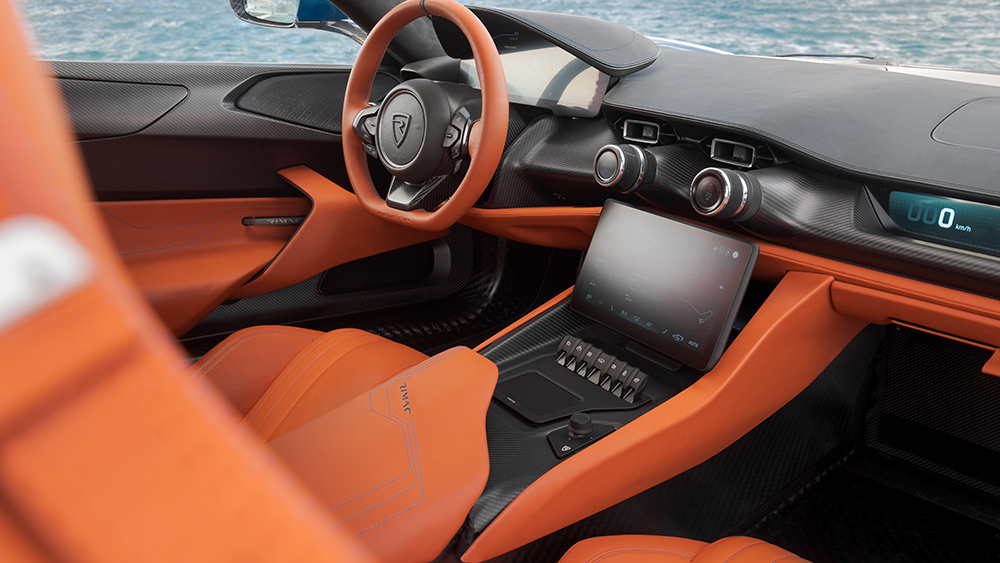 The vibrant interior of the hypercar.

Because it’s all-electric, that extraordinary output is available instantly. When you do have a chance to deploy it in its entirety, be prepared: A straight, dry track will work in a pinch, but a runway is better. Because what happens next doesn’t feel violent, exactly—each of the four electric motors matches its output perfectly to the available grip—as much as alien, non-automotive. As the rate of acceleration just keeps climbing and climbing, instead of tailing off, you feel like you’re no longer in a car—it wakes that primal part of the brain that tells you that you’ve fallen off a cliff.

At full steam, the Nevera is far from the stereotype of a silent EV, with 1.4 megawatts actually screaming through the car. The noise adds to the drama, as much psychological as physical, in a way no other road car can match, making for a dangerously charismatic split personality worth every one of its seven figures.