The numbers-matching example will be available online through Stratas Auctions starting September 8.

Lancia isn’t exactly a household name, and when the Italian automaker stopped selling cars in North America in 1982, it was only a matter of time until the marque became forgotten by all but a few die-hard enthusiasts. Much of the malaise took hold after Lancia became a subsidiary of Fiat in 1969, and with the subsequent launch of the Beta series in the 1970s. Essentially rebadged Fiats, albeit great looking ones, the lineup included a coupe, estate wagon, sedan and the Montecarlo (Scorpion in America), which was a noteworthy Pininfarina design that looked like a tiny Ferrari. But with only 81 hp from an emission-control-choked Fiat inline-four engine, the cars had little bite to back up their sporting looks.

It wasn’t always that way, though, and it’s easy to imagine Vincenzo Lancia, who founded the company in 1906, rolling in his pine box at the thought of such compromised smog-era offerings. In its formative years and during its heyday, Lancia can be credited with some landmark engineering advances—the first to market with production cars featuring a complete electrical system, a monocoque chassis, an independent front suspension, a five-speed gearbox and a V-6 engine. 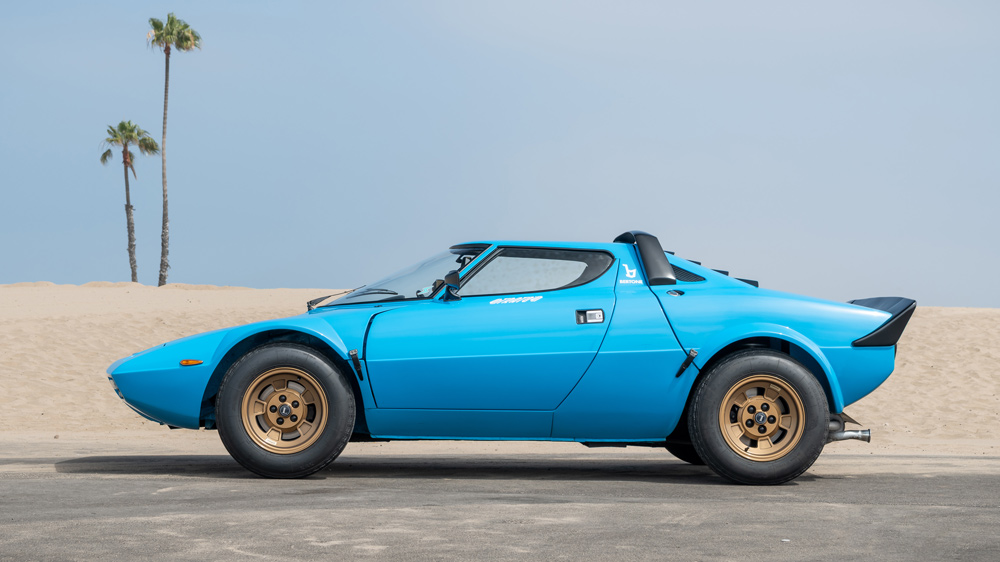 The 1975 Lancia Stratos HF Stradale that will soon be offered online through Stratas Auctions.

Models like the 1921 Lambda, the Aurelia B20 coupes and ultra-collectible Aurelia B24 Spider from the 1950s are lynchpins in classic collections today, in part due to the high level of engineering and build quality that characterized Lancia automobiles. Of course, there’s also the timeless styling reflecting the best of their respective decades.

But the Italian automaker had a few tricks remaining as the 1960s came to an end, and in the field of rallying, there were few marques that achieved the success of Lancia. The small but mighty Fulvia HF Rallye was a front-wheel-drive terror, with all of 1,600 cc to prove that bigger isn’t always better. Fortuitously, the 1980s saw continued Lancia success with the Rally 037 and, later, the boxy-but-beautiful Delta S4 Integrale, all of which have become collectibles in their own right. 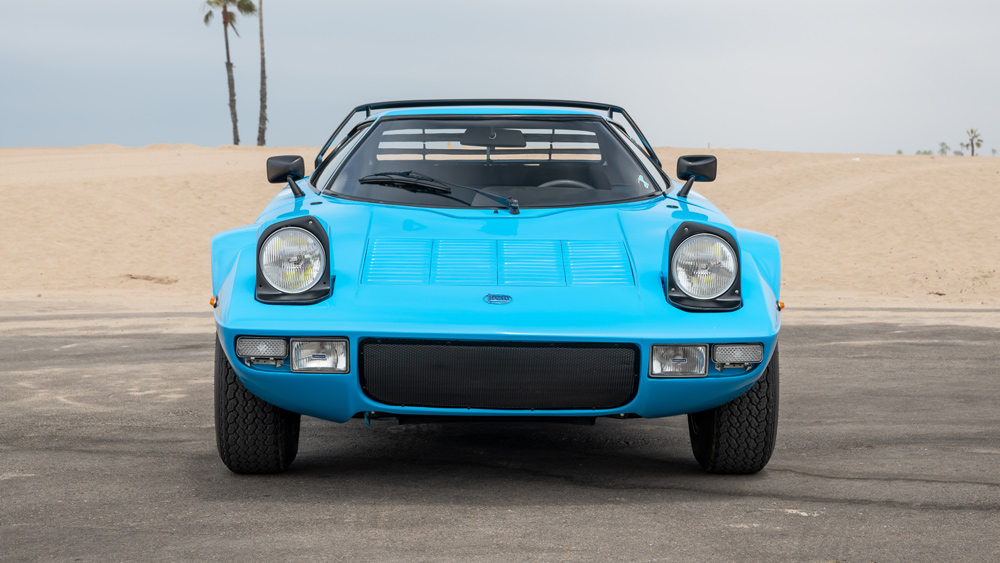 No rally car in Lancia history, however, has achieved the renown of the Stratos HF, a stumpy design masterpiece penned by Marcello Gandini when he was at Bertone and working on the soon-to-come Lamborghini Countach. Made from 1973 to 1978, the Stratos HF (for High Fidelity) looks unlike any other car to come from the maestro’s pen, though certain styling cues— like the greenhouse—ever-so-slightly recall the Lamborghini Miura. 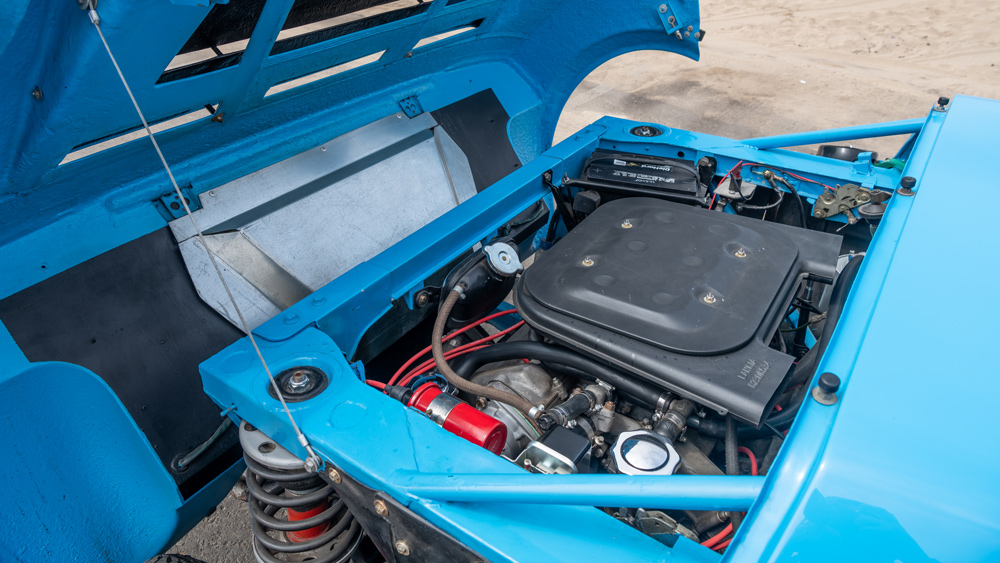 But the Stratos was not for rich-and-famous posers for whom Ferraris, Maseratis and Lamborghinis were often the automotive prop of choice. Instead, the bare-bones Lancia, with its buckboard-short 85.8-inch wheelbase, iffy fiberglass bodywork and minimalist cockpit, was aimed squarely at rally competition. And rally it did, in dominating fashion. It was a star of the Monte Carlo Rally, and won the World Rally Championship in 1974, 1975 and 1976. In race-car guise, it won the 1974 Targa Florio, took five victories in the Tour de France Automobile and three wins in the Giro d’Italia Automobilistico. 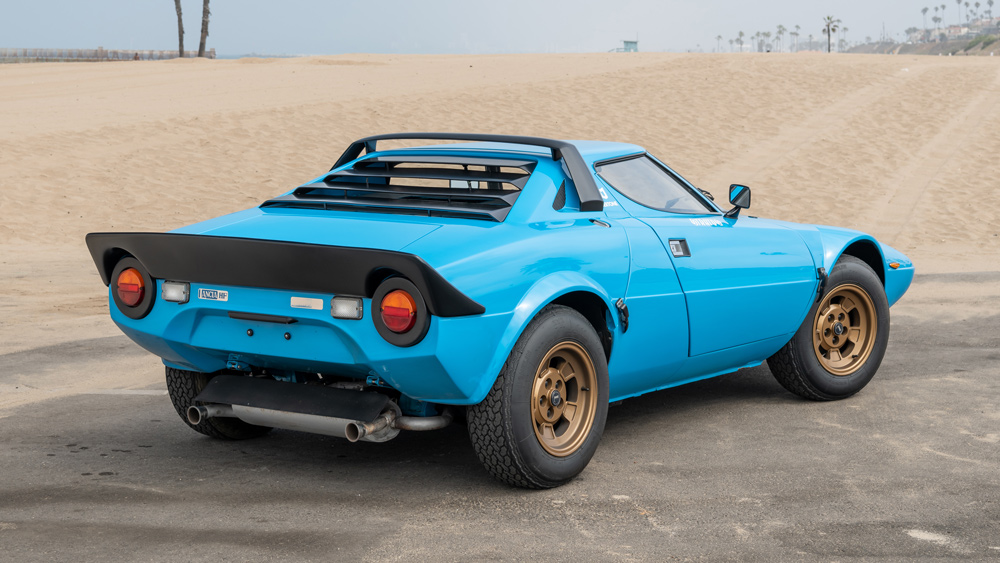 The formula for success was pretty simple, and put first things first. A space-frame chassis, a fiberglass body and a spartan interior with door pockets large enough to store a racing helmet kept things light, with the Stradale (street) version tipping the scales at a mere 2,161 lbs. Under the rear clamshell engine lid is a transverse-mounted, 2.4-liter Ferrari Dino V-6 engine that makes about 190 hp at 7,000 rpm in street tune, and about 100 hp more in the competition version. A five-speed gearbox stirred things up, and lightning-fast rack-and-pinion steering made the 146-inch-long car as agile as a hummingbird in flight. With such a glorious competition history to its credit, and with just less than 500 made, the Stratos is a highly desirable collectible today. 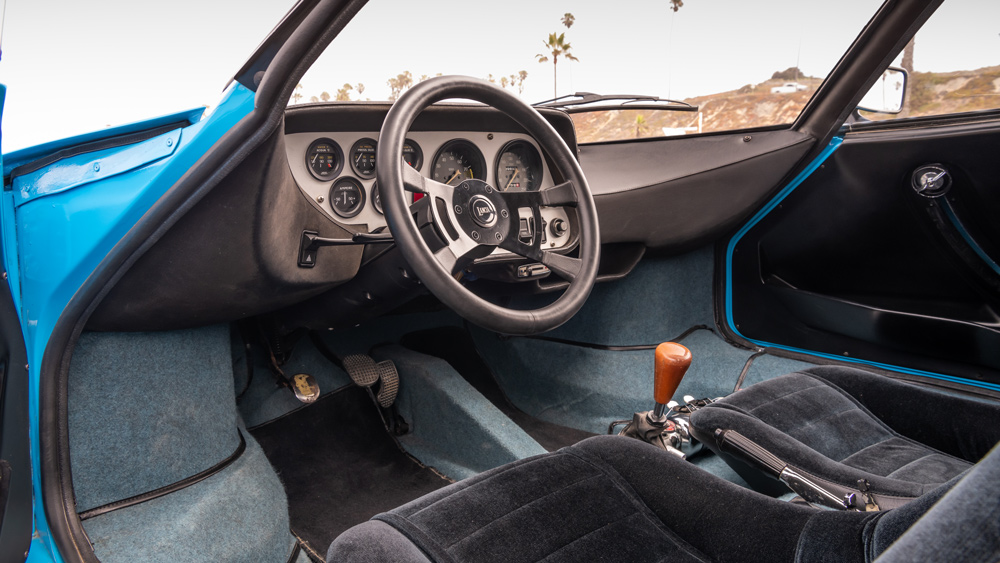 While not specifically the rally version, Lancia’s Stratos HF Stradale still has a minimalist interior.

This 1975 example is a matching-numbers car, wearing correct-as-original Azzurro (blue) paint and fitted with its original drivetrain. It’s enhanced with an ownership history from new and an odometer reading just over 30,000 kilometers (roughly 18,641 miles). The exceptional representation of the model will be for sale online, offered by Stratas Auctions from September 8 through 24, and is estimated to fetch between $500,000 and $550,000.