It’s the ninth time the German marque has taken the contest’s top honor, a feat equaled only by Bugatti.

Monterey Car Week, the world’s flagship exhibition of all things automotive, culminated yesterday with the 70th edition of the Pebble Beach Concours d’Elegance on its namesake stretch of Northern California’s coast. Amidst a highly festive atmosphere, one of the industry’s oldest automakers had even more to celebrate when the grand finale’s confetti rained down on a 1938 Mercedes-Benz 540K Autobahn Kurier, named Best of Show from a field of 230 contenders. 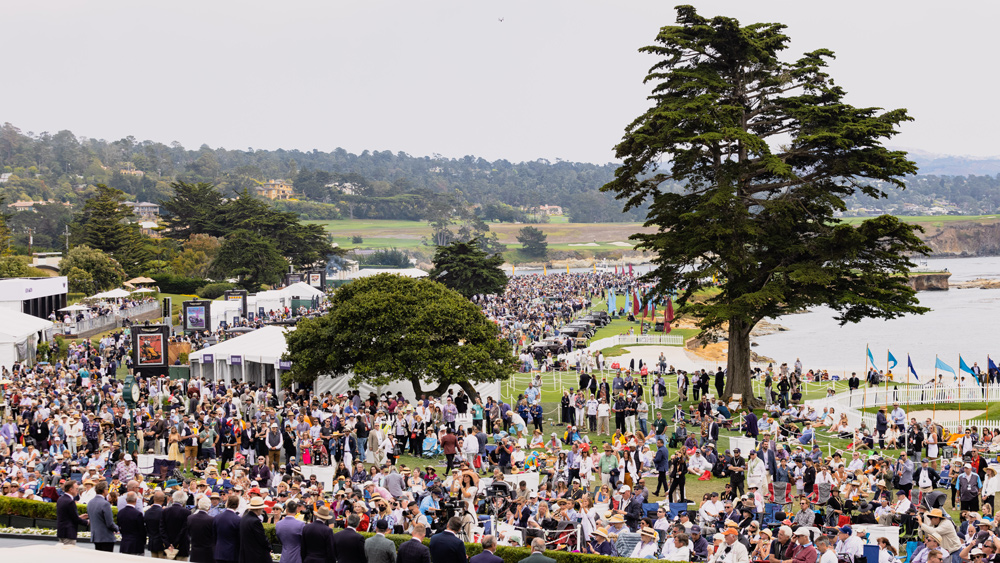 The concours field in full swing.

It’s the ninth time that Mercedes has earned the accolade, tying Bugatti for most top honors at the fabled Pebble Beach Golf Links. Surprisingly, the award comes roughly 48 hours after another variant of the model from the same year, a 540K Special Roadster, took Best of Show at the Quail, A Motorsports Gathering in neighboring Carmel Valley.

“This Best of Show winner embodies so many sensational features—styling, speed and performance,” said Sandra Button, chairman of the Pebble Beach Concours d’Elegance, in the official news release. “Built to rule the new German Autobahn in 1938, this rare automobile is truly an example of beautiful German design,” she continued. 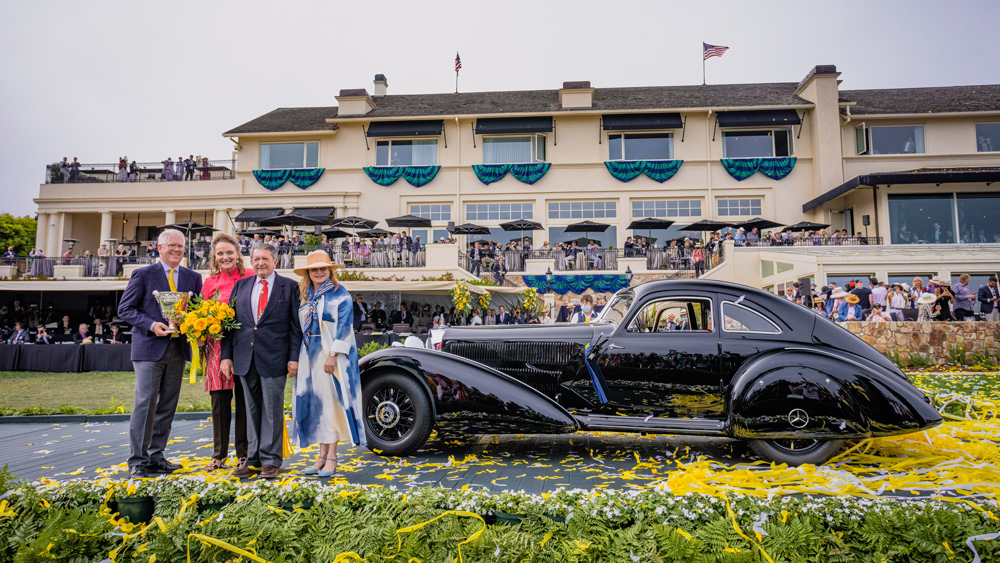 Rare is right. It’s the only extant example of two that were made, and is now part of Arturo and Deborah Keller’s collection. The Keller’s are no strangers to Pebble’s coveted Best of Show recognition, which includes a massive silver cup and, with Rolex being the official timepiece for the event, a Rolex Oyster Perpetual Datejust 41 watch. The couple have had two other cars—both Mercedes-Benz models—capture the same title: a 1930 Mercedes-Benz SS Erdmann & Rossi Roadster and a 1936 Mercedes-Benz 500K Special Roadster, in 2001 and 1986, respectively.

Other classics in the running this year were a 1937 Bugatti Type 57S Corsica Drophead Coupé belonging to Joanie and Scott Kriens from Saratoga, Fla., a 1956 Maserati A6G Zagato Coupé owned by Wendy and Jonathan Segal out of San Diego, Calif., and a 1966 Ferrari 365 P Pininfarina Berlinetta Speciale, part of RQ Collections in Woodland, Tex. 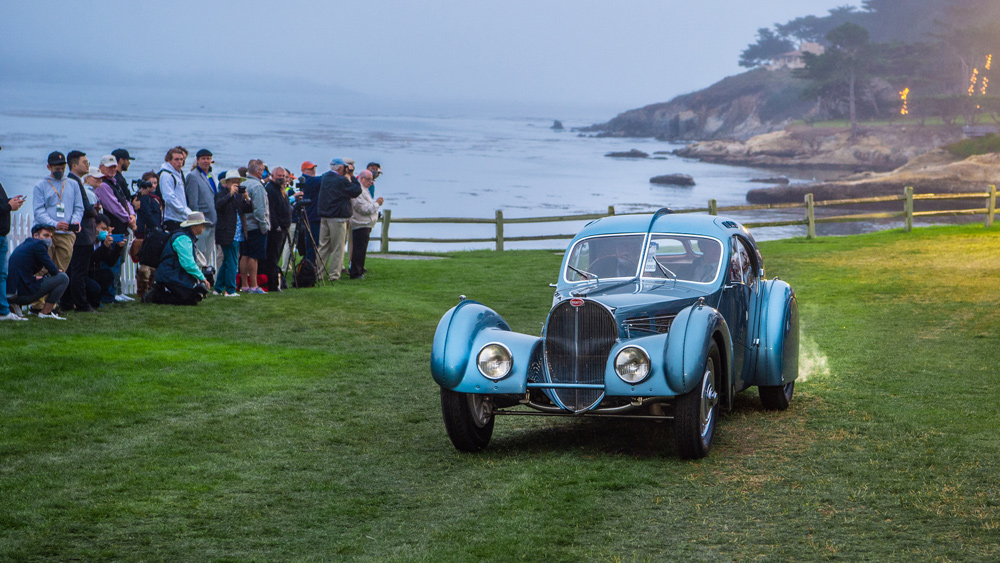 In all, a small army of expert judges, including the likes of Stephan Winkelmann, president of Bugatti and Lamborghini, and Ed Welburn, former global head of design for General Motors, bestowed awards across 26 classes and doled out another 27 special honors. 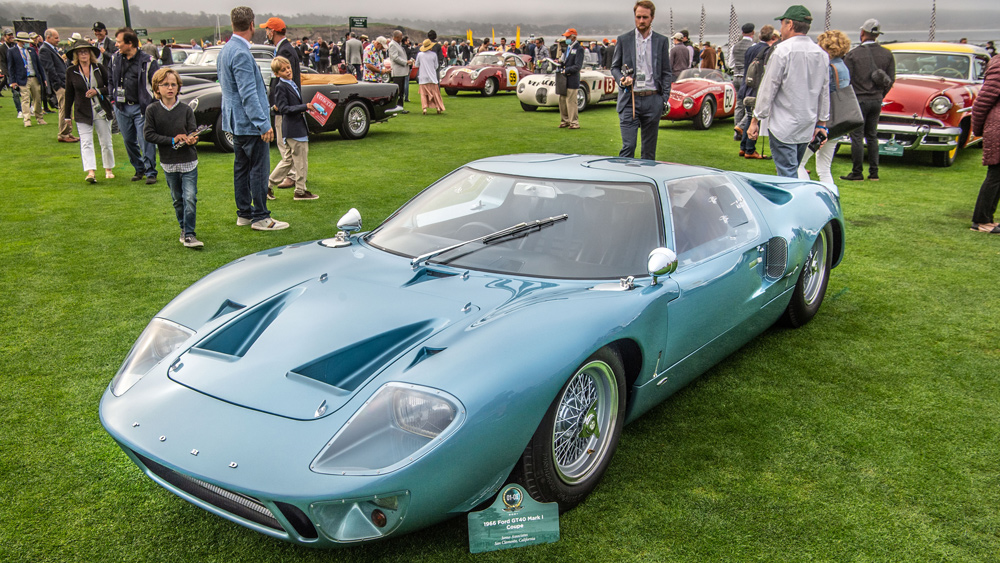 Perhaps it was due to the event’s cancellation last year, but the general spirit of camaraderie for the 2021 concours seemed on overdrive, as did a sense of inclusiveness. This was fueled, in part, by the presence of 38 past Best of Show vehicles and every first-place finisher from each Pebble Beach Road Race, which ran from 1950 to 1956. The latter included the 1955 Ferrari 750 Monza Scaglietti piloted by Phil Hill and Carroll Shelby during the last two contests. 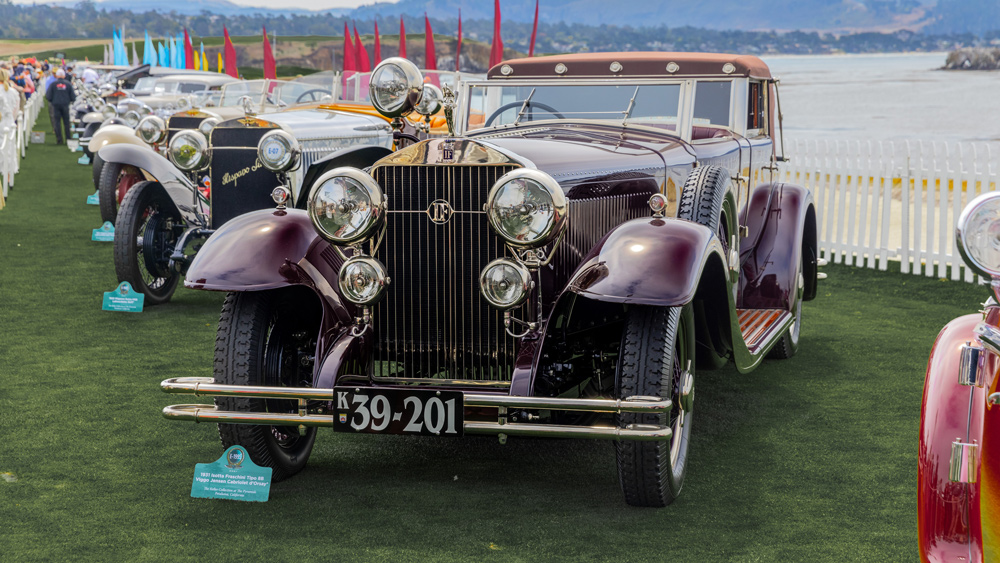 Also on hand was an impressive stable of Lamborghini Countach models, in tribute to the car’s 50th anniversary, complemented by the commemorative Lamborghini Countach LPI 800-4 sitting nearby on the Concept Lawn and unveiled just two days prior. As usual, that patch of green before the main entrance was ringed by camera-clad enthusiasts trying to get a glimpse of the future through cars like the Koenigsegg’s Jesko Absolut and McLaren’s Artura. In some cases, vehicles were making their public debut while others, like the Maserati MC20 now in production, were making up for missing their moment in 2020. To be sure, automakers were paying rapt attention to how their new wares were being perceived. 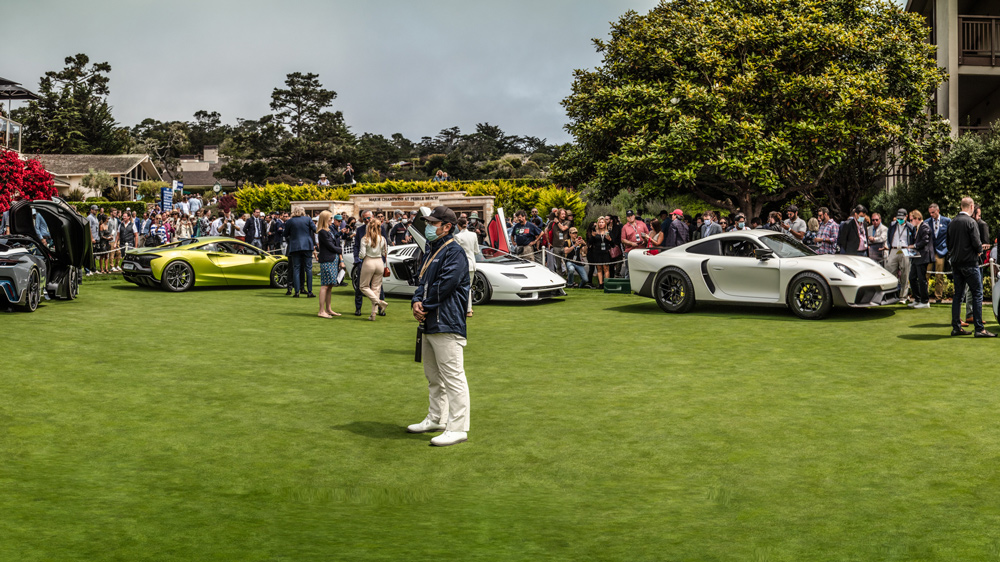 Inside the circle of trust on the Concept Lawn.

“The Maserati MC20 super sports car received an amazing reception at the Concept Lawn,” says Bill Peffer, head of Maserati Americas. “Production has begun at our plant in Modena, Italy, and this incredible vehicle is sure to impress the most discerning customers when it starts to arrive in North America later this year.”

Peffer’s optimistic tone was echoed by seemingly every manufacturer present, with the global lockdown resulting in a record number of orders for many automakers. But while the Quail’s “Motorsports Gathering” has overt OEM promotion as a major component, the Pebble concours keeps it at the periphery, with notables such as Ferrari, Bentley, Lamborghini, Bugatti and Aston Martin transforming pavilions or on-site residences into temporary lounges where VIP guests and valued customers can preview the latest releases and customize their orders on the spot. 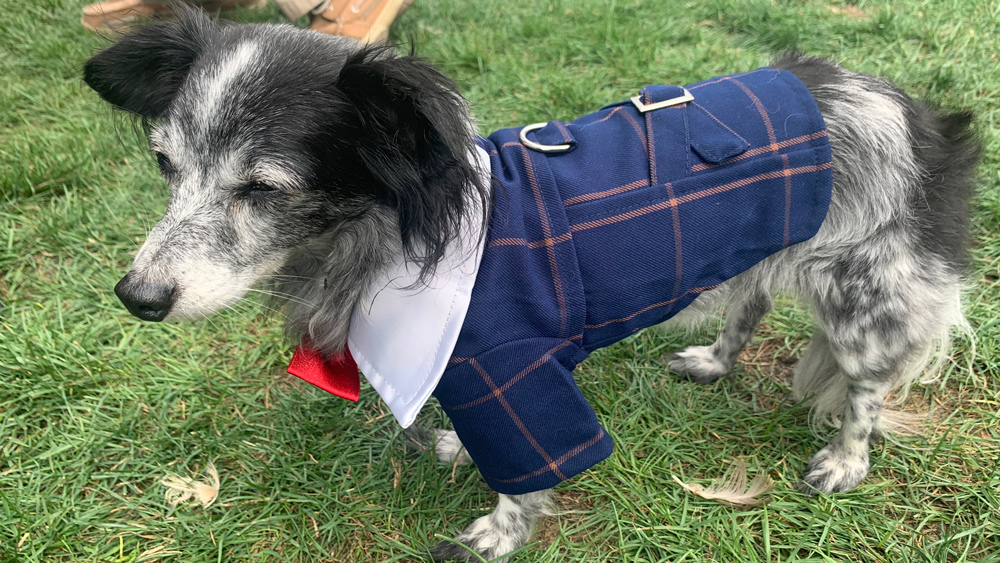 One of the smartly dressed attendees.

“We’ve always been here and have had many, many world reveals in the past,” said Cedric Davey, Bugatti’s chief operating officer of the Americas. “This is really our home away from home,” he adds, standing next to a production prototype of the new 1,600 hp Bugatti Bolide, a track-only beast that Davey describes as “the extreme version of what can be done with a W-16 engine.” Though more akin to an LMP1 prototype from Le Mans, the Bolide sports notable design cues from bygone Bugatti models such as the Type 57SC Atlantic, seen on the show lawn. 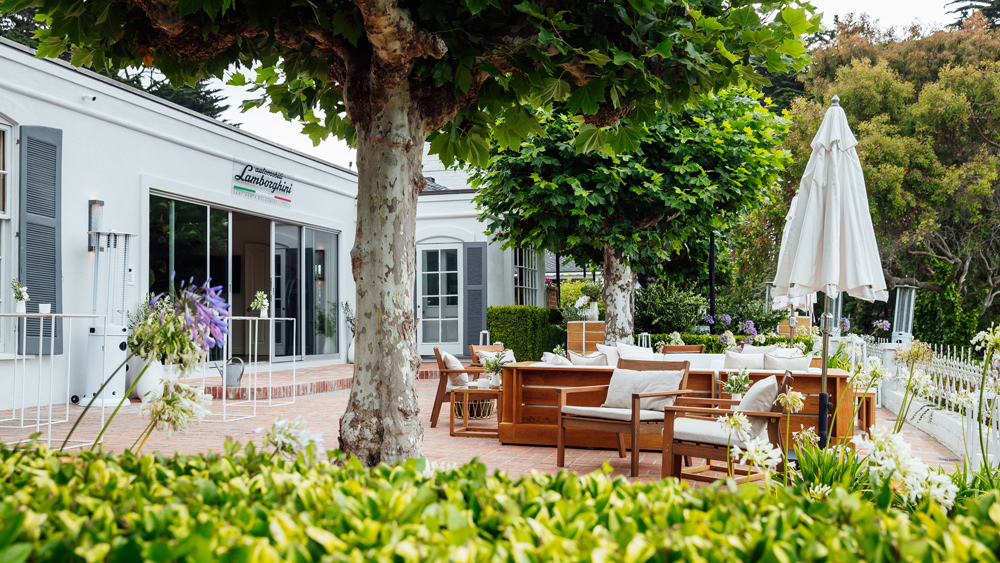 The Lamborghini Lounge prior to the start of the concours.

Just up the road from Bugatti’s temporary oasis, another French marque had set up shop. The storied Delage, which shuttered in 1953, has been brought back by entrepreneur Laurent Tapie, who, along with his team, is developing the 1,100 hp D12 hypercar. And while the “jet-fighter” descriptor is used ad nauseam within automotive parlance, it’s warranted in the case of the tandem-seated D12 fit with a cockpit canopy that raises like a jet fighter’s. Holding court while also surrounded by three Delage models from early last century, Tapie described Pebble as “the place to be,” adding that “it’s the most prestigious concours in the world, so it’s a must—a no-brainer for us.” 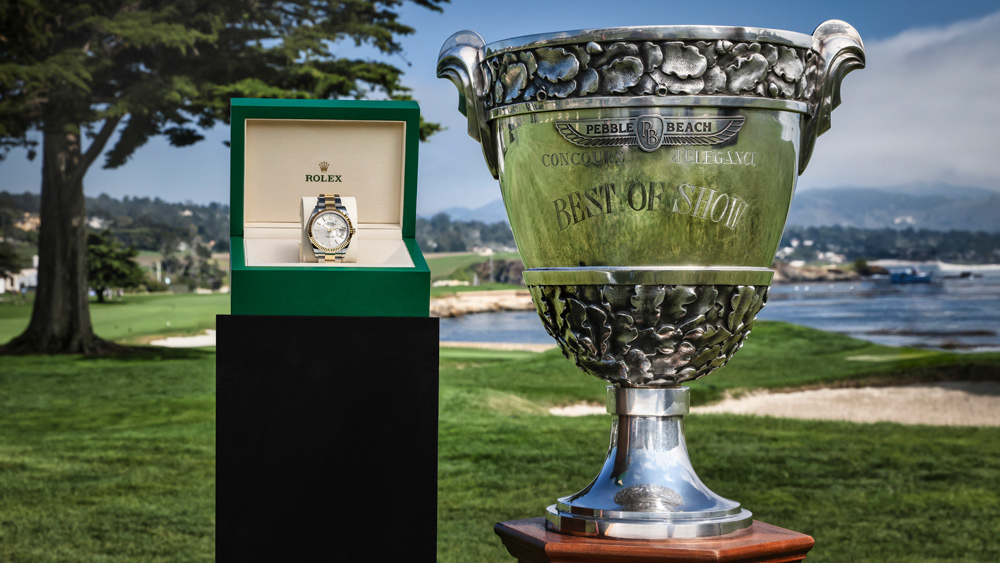 The trophy and Rolex Oyster Perpetual Datejust 41 given for Best of Show.

The overall juxtaposition of unparalleled classic and cutting-edge machines set against a timeless backdrop is why the Pebble Beach Concours d’Elegance often becomes a lifelong tradition for car enthusiasts.

“This is my first time here, and the concours is just blowing away every expectation that I had,” said Jonathan Weizman, attending through Robb Report’s RR1 members club. Asked if he would return, Weizman didn’t hesitate. “Yes, absolutely,” he said, before adding, “Actually, I’m hoping to show a car in the next year or two.”