The three-time Formula 1 champion and Rolex spokesman gives insight on his success and why he thinks time is of the essence, especially now.

Even for those who don’t know a checkered flag from a tablecloth, the name Jackie Stewart instantly conjures images of racetracks and victory laps, so pervasive is the hall-of fame driver in popular culture nearly five decades after retiring. His is a legacy that includes a top-10 finish at the 1965 24 Hours of Le Mans and the Rookie of the Year honor at the 1966 Indianapolis 500 early on in his career, then escalates to a total of 27 Formula 1 Grand Prix victories, three Formula 1 World Drivers’ Championship titles and a knighthood.

With that résumé, and by being a vocal proponent for increased safety protocols, Stewart has had an impact on motorsport that is still felt today, and all accomplished with a demeanor as charming as his Scottish brogue and personal style. Contributing to the latter is the ever-present Rolex timepiece that graces his wrist. The accoutrement is reflective of his 53-year role as a Testimonee, or ambassador, for Rolex—the official timekeeper at this weekend’s preeminent automotive events in Northern California, including the Quail Motorsports Gathering, the Rolex Monterey Motorsports Reunion (of which it’s obviously the title sponsor) and the Pebble Beach Concours d’Elegance.

As the 2021 edition of Monterey Car Week ramps up, Sir Jackie Stewart shares with Robb Report some of his backstory, why his partnership with Rolex has been such a winning one and what makes the next few days in Monterey so special. 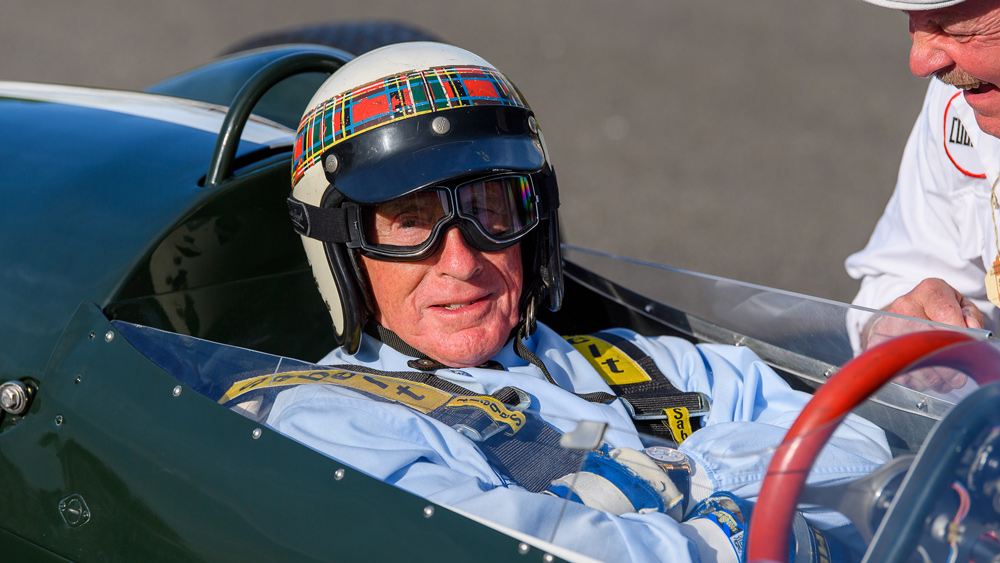 Jackie Stewart back behind the wheel for the Goodwood Motor Circuit’s 2019 Goodwood Revival in the UK.

How, and when, did you first get involved with motorsport?

I left school at not quite 15 years of age. I’m an extreme dyslexic and couldn’t read or write correctly, things that everybody else does so easily. So I was well pleased to be out of school. I started off selling gas at fuel stations and then became a mechanic at my father’s and mother’s wee garage in Dumbarton, Scotland.

One of our customers was a very rich young man, named Barry Filer, whose family did not allow him to race because he was the only son and the business was a big one. I was his mechanic and, as a reward, he had me drive his Porsche Super 90 and I finished second in a race. He said I should do it again, and I won the next race. I then drove for him in an E-Type Jag until Ecurie Ecosse, the Scottish team, picked me up. That took me down south to England, and from there I was picked up by Ken Tyrell [in charge of the Cooper Formula Junior team] and began single-seater racing. It was a bit of a rocket ship that took off from a very shallow beginning.

What are the strengths you possess that helped you succeed despite the early challenges?

I was lucky that I was very good at a sport that was not motor racing, and that was trapshooting. I started when I was 14 years of age and went on to shoot for Scotland and Great Britain. I did that until I was 24 and got married, as I was unable to be involved in an amateur sport and be a married man. But I shot my way around the world, won most of the big events and came in fifth or sixth at the World Championship.

The thing I learned from shooting that I took to motor racing was what I call, “mind management.” When you go to shoot in a major championship, you get nervous, as you would in any sport. I learned how to remove emotion so that when that target came up at 135 mph, I wasn’t uptight. Because once you miss the target [in shooting], you never get it back. I can make a mistake in a racing car, not a big mistake but a mistake in one corner, and make it up in the next four or five corners. Shooting taught me how to remove emotion, because emotion is dangerous. I think that was the biggest thing that I had to my advantage and was able to use to get success. 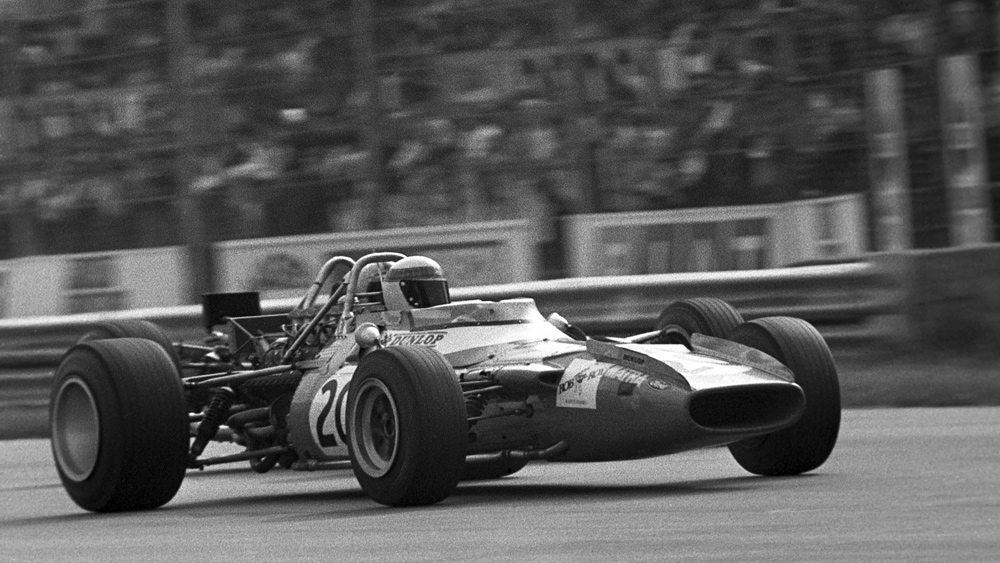 Competing at the Grand Prix of Italy in Monza, circa 1969.

You are known for your first-place finishes, but what defeat stands out in your career?

Indianapolis [the 1966 Indianapolis 500]. The three Brits were in front; I was leading and Graham Hill and Jim Clark were behind me, but were nearly two laps behind me—I was having a hell of a good race, but it disappeared. With only eight laps to go, an oil pump from the bottom of the engine seized, which meant there was no more oil coming up into the moving parts. Sadly, I just had to cruise in with no power and walk the rest of the way [to pit lane]. But I did win Rookie of the Year because it was my first year at Indianapolis.

Which victories are you most proud of?

I suppose it’s my first-ever grand prix that I won, which was Monza in 1965. That was a big deal for me to win that, and it was at the end of my first year in Formula 1. Then, in 1966, I got pole position at Monte Carlo and went on to win that race.

Switching gears to watches, what was your first Rolex timepiece?

Well, I go back to that race in Indianapolis. The owner of the team flew me to Texas, where he had a home, and took me to a Rolex store in Houston. He said, “Look, you’ve done so well that I’ve got a surprise for you, I’m going to give you a Rolex watch.” I had never had a proper watch in my life, and there it was, a Day-Date—top of the line. I wasn’t with Rolex at the time. It was a tremendous thing for me to have, and that was my first Rolex experience. Of course, now I’ve been with the company for 53 years. 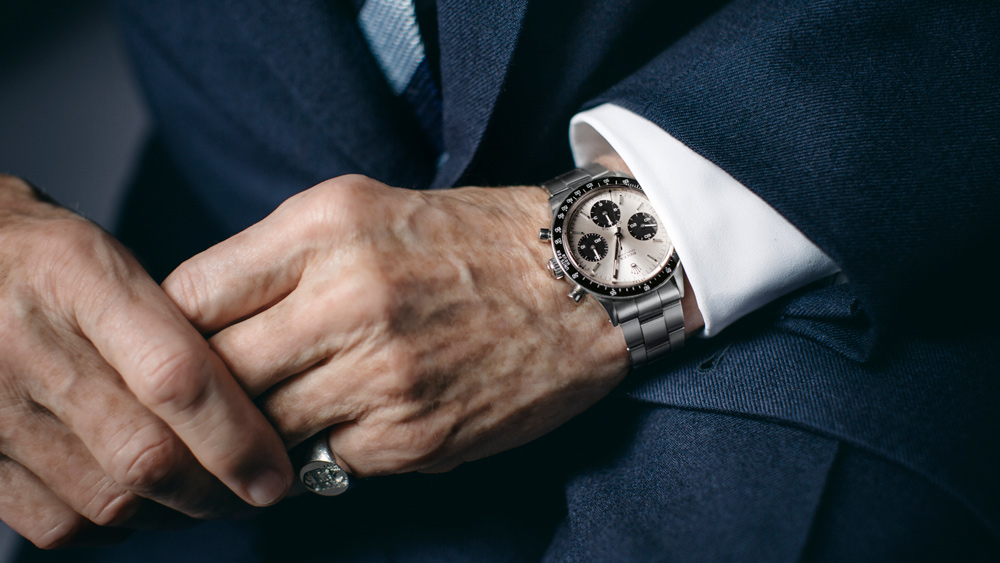 How has Rolex contributed to racing?

The company is present in every sense. It’s the official timekeeper for Formula 1 right now. At Laguna Seca [WeatherTech Raceway Laguna Seca] it’s the official timekeeper, and it has been at Daytona for stock-car racing for many years; it has been at Le Mans for a great many years, playing a really important role. It’s so blue chip, and does everything with such taste.

Which timepieces stand out in your collection?

A man I used to drive for gave me his Rolex watch before he died at the age of 92. It had been his father’s back when Rolex first produced a watch. That’s the most treasured one I have. I was also given a Rolex called the King Midas, which hardly anyone knows about. It’s very heavy and very unusual in every way—Elvis Presley had one. And then I love a steel Rolex GMT-Master that I wear around the house and do all sorts of things with. I’m lucky enough to have a few, and they’ve all got a special story to tell. It’s a very long relationship, not many sports people have relationships of that period, but then again, that shows the integrity of the company. Arnold Palmer, Jean-Claude Killy and I signed [with Rolex] on the same day—the 28th of April, 1968. 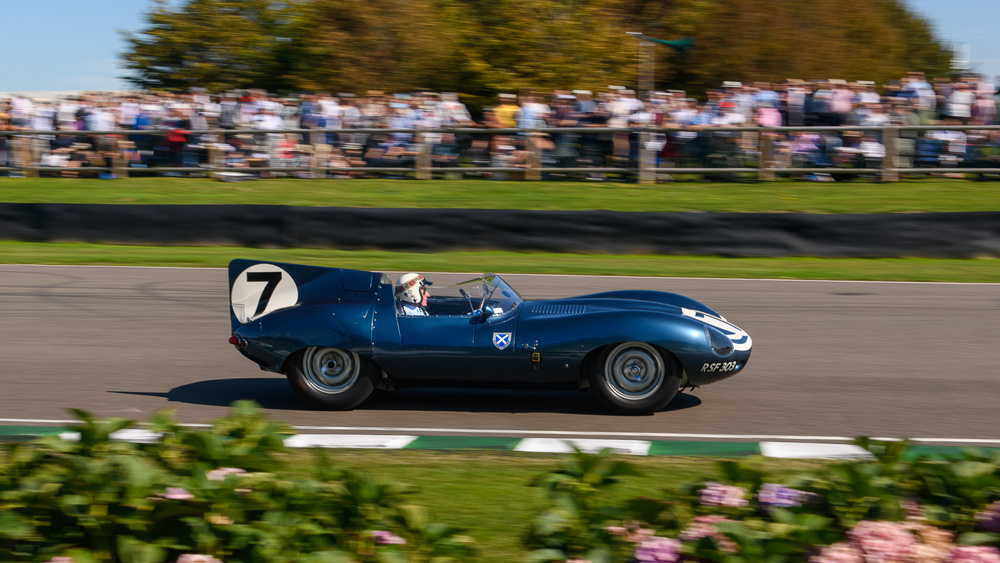 When did your involvement with Monterey Car Week begin?

My first attendance was at Laguna Seca driving a Lotus Cortina [also known as the Ford Cortina Lotus]. I drove Laguna Seca for Ford while I was doing Formula 1. I went to Laguna Seca a lot. I remember driving [Tazio] Nuvolari’s Maserati, and [Juan Manuel] Fangio and Phil Hill were there driving Alfa Romeos—so many happy memories. Sadly, I don’t think I’m going to be there this year; well, the fat lady hasn’t sung yet—I might show up.

What is it about Monterey Car Week, and the Rolex Monterey Motorsport Reunion in particular, that brings you back?

I think it’s the best collection of performance cars in the United States; I can’t say the world, but certainly North and South America. People come from all over to have their cars race, properly race. They’re not pussycats, they’re all driving like hell—it’s hardcore. [The Rolex Monterey Motorsport Reunion] is a special event in American motorsport, and it’s the same weekend as Pebble Beach, so it’s a big weekend.

Does motorsport need to change to stay relevant?

Not much. It’s the most advanced form of engineering that I know of in the world. Of course, we’ve got to move for not only the current generation but future generations with regard to energy. There’s only going to be maybe two or three forms of energy, not electric by the way, other forms of energy, which could include even nuclear energy. What we’ve got to have is an energy that will be able to continue the current Formula 1 engine. We might end up with a smaller engine with even more power, and still environmentally strong. 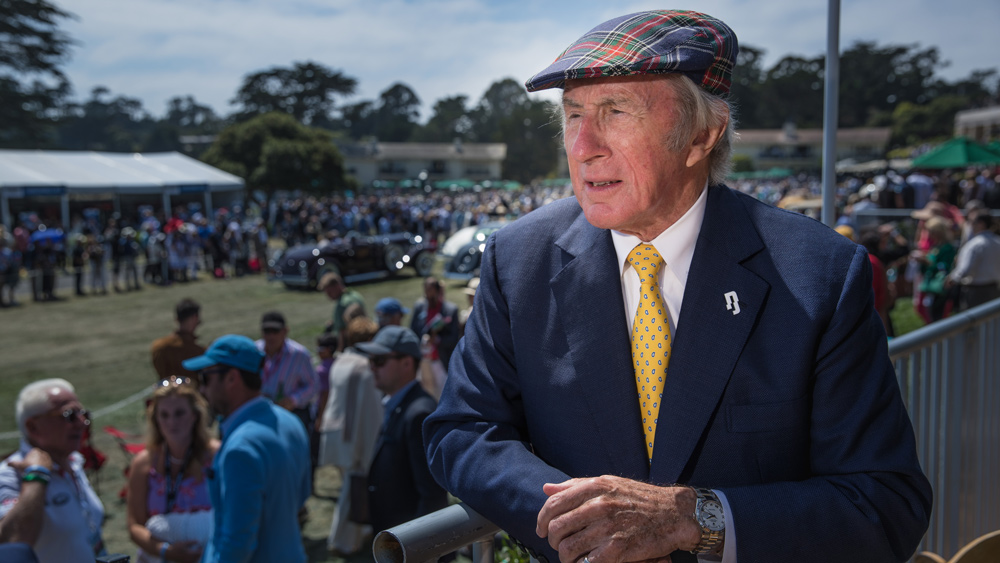 The hall-of-fame racer at a previous edition of the Pebble Beach Concours d’Elegance.

How does Formula 1 play a part in the charity you founded?

Formula 1 still is the fastest problem-solving example in the world, even beyond aerospace. Races sometimes take place within one week of each other, and there may be as many as six major changes from one grand prix to the next. The speed of change in Formula 1 is extraordinary.

My wife, very sadly, has dementia. I started a charity called Race Against Dementia and use Formula 1 as an example. We take young Phds from the best universities and bring them to McLaren and Red Bull to see how they problem-solve at a speed that the medical world simply doesn’t know how to do yet. We’re getting them to accelerate their knowledge and, hopefully one day, find a cure and preventative medicine. That’s the same challenge with regards to energy, the world we are living in and all that’s happening. Everybody’s got to pull their own weight in a stronger way than they’ve ever done before.