Owned by one family for nearly six decades, the example crosses the block at the Quail Lodge Auction on August 13.

Every country has its iconic automotive marques; names stretching back to the earliest years when opulent coach-built cars expressed the epitome of luxury and advanced technology. France has its Bugatti, England its Rolls-Royce, America its Duesenberg and Germany has an automaker that goes so far back in time that its first model didn’t even look like a car—the Benz Patent-Motorwagen, which rolled its spindly wheels onto public roads in 1886.

Advances in engineering, metallurgy, rubber and even fuel accelerated progress almost exponentially, and by the Roaring Twenties, cars had become international symbols of power, wealth and style. Few prewar automobiles had the panache and presence as did the Mercedes-Benz sports cars, whose supercharged flagships proved their mettle in motorsport competition, attracting customers that included racers, royals, celebrities and industrialists as rich as ancient king Croesus. 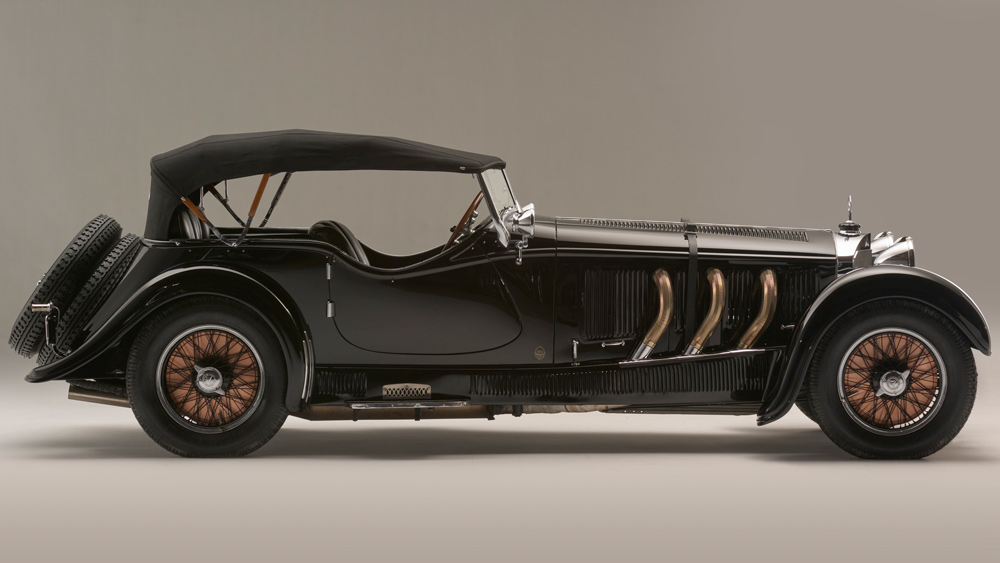 One notable Mercedes-Benz is among an exclusive array of collector cars offered at the Bonhams Quail Lodge Auction in Carmel, Calif., on Friday, August 13. The antique automobile is a 1928 Mercedes-Benz 26/120/180 S-Type Supercharged Sports Tourer, estimated to fetch as much as $4 million.

Supercharged prewar Mercedes-Benz sports cars are rare, and are regarded by collectors and historians as some of the most significant vehicles of the era, based on technological advancements, high performance and reliability that set standards for the day. “These cars were the zenith of the industry in 1928, and have been coveted ever since,” says Rupert Banner, director for Bonhams Group Motoring. “Bonhams is delighted to present this car from its custodian family of more than 57 years. Freshly repainted in the strikingly beautiful black guise, its sale provides a baton-passing, generational opportunity for a new collector to continue to show or tour this wonderful Mercedes.” 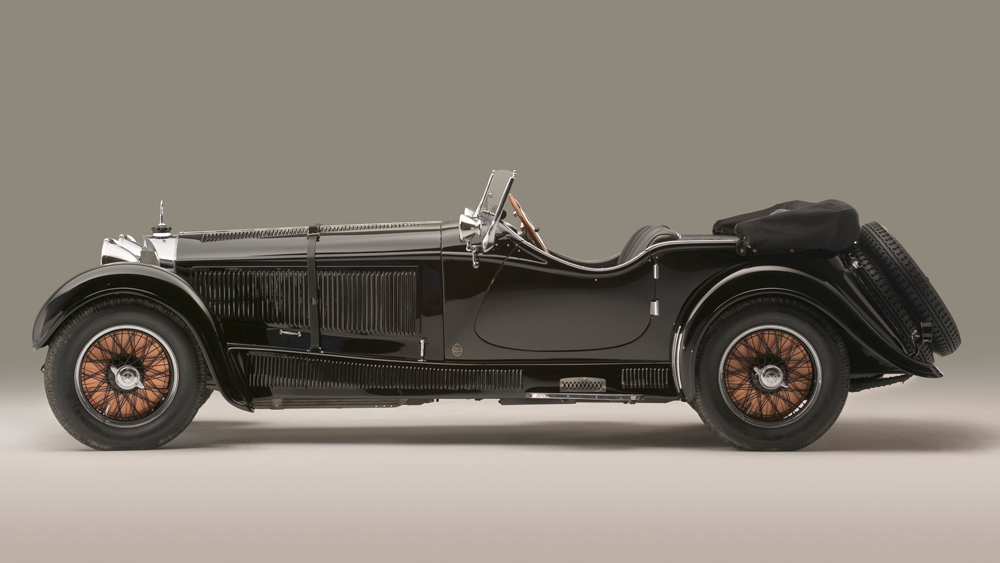 One of only 146 examples made, this rare Mercedes-Benz is expected to fetch as much as $4 million at auction.

Built during the Golden Age of Mercedes-Benz and one of only 146 examples made, this model was the flagship of the marque between 1926 and 1930, attracting buyers including Al Jolson and the Marx brothers, as well as land speed–record holder Sir Malcolm Campbell. But the Great Depression changed the fortunes of many, with luxury carmakers in Europe and the United States feeling the effect of a suddenly altered economic landscape.

This model was engineered by Ferdinand Porsche to win on the racetrack and dominate hill climbs and, fortuitously, won its debut race at the Nürburgring. The “icing on the cake” was a Roots supercharger force-feeding a 6.8-liter, 6-cylinder engine, boosting output from 120 bhp to 180 bhp in mere seconds. 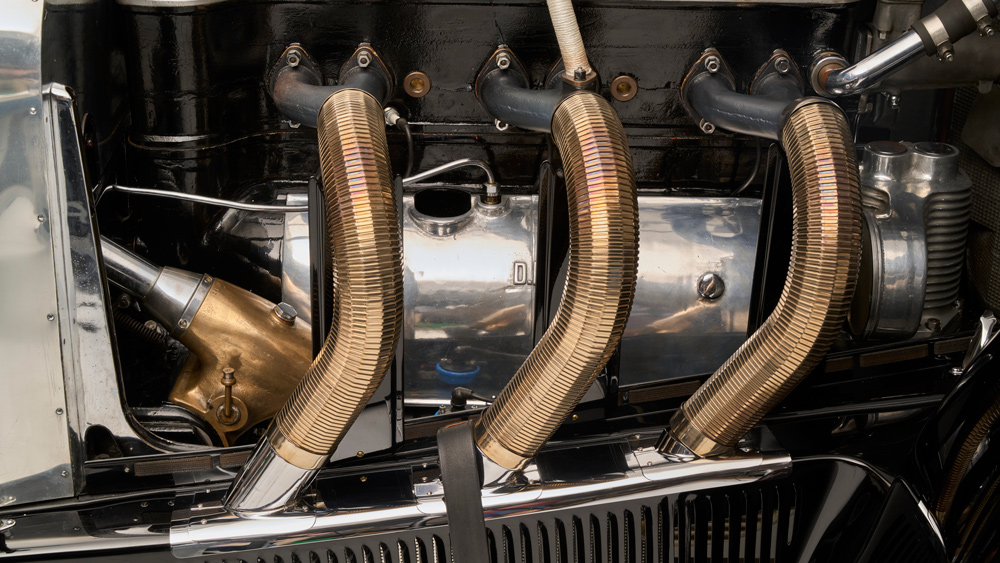 The vehicle carries a 6.8-liter, 6-cylinder engine bolstered by a Roots supercharger.

Remarkable about this example is that it’s been retained in one family’s ownership for nearly six decades. During that time, the car has proven its mettle as a “driver,” most recently participating in the 2015 Colorado Grand. Put in perspective, the price of the chassis was a staggering $7,000 when new, and this specific car was bought sight unseen for $15,000 by the current owners’ father in 1964.

An extensive restoration was undertaken in 1968, and the car was finally handed down to the owner’s children in 2016, who commissioned a repaint in black, with accents that include copper brake drums and chrome accessories. The automobile will be presented publicly with these aesthetic changes for the first time at the Quail Lodge Auction. 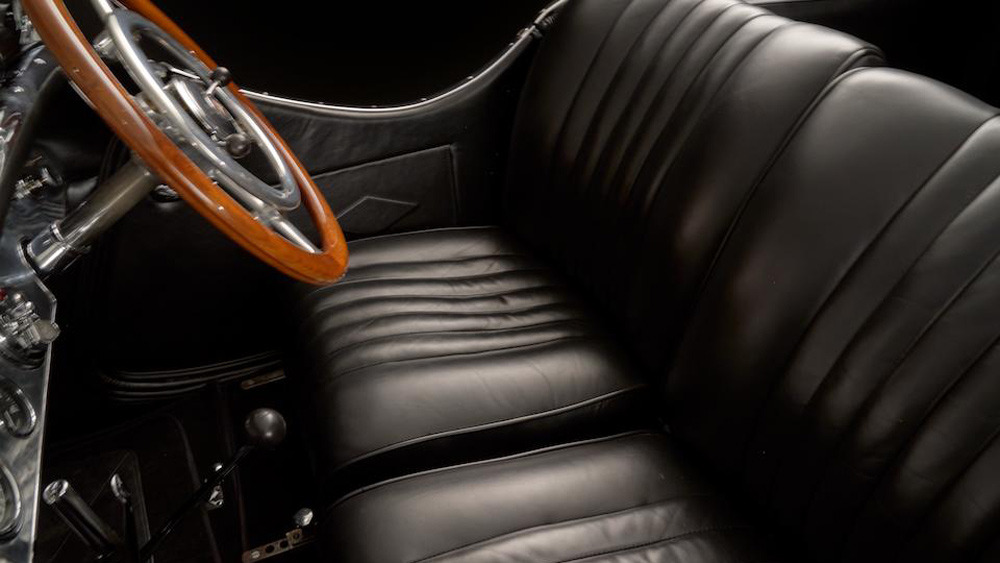 The pristine interior dressed in black.

Collectors whose interests include French and Italian masterpieces will also appreciate other cars on offer at the sale, including a 1948 Talbot-Lago T26 Record Sport Cabriolet that features remarkable coachwork by Figoni et Falaschi, a 1952 Ferrari 212 Europa Cabriolet with body by Ghia, and a perineal classic, the 1955 Lancia Aurelia B24S Spider America with exquisite coachwork by Pinin Farina.